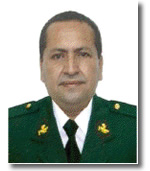 José Luis GIL joins SMG’s network this past July as Director of Investigations in Peru. Jose Luis held the rank of Major in Peru’s National Police force. His main areas of expertise were Anti-Terrorism, Anti-Piracy and Intelligence. During his 25 year career his most prominent post was as Commander of Public Safety of the Loreto region, Peru’s jungle Department, were he implemented a successful campaign against the sexual exploitation of children. He graduated in 1987 from Peru’s National Police College with a degree in Public Administration and is currently finishing law degree studies this fall.