DNA evidence is used widely in criminal investigations and it has proved its weight in gold for proving people innocent or guilty or a crime.  But how does this microscopic analysis actually do its job and how is it used in investigations?

First the DNA must be harvested from the crime scene and isolated from any other factors.  Then the sample and the results must be processed.  Lastly the results are compared to those found at the scene to see if they are or are not a match. 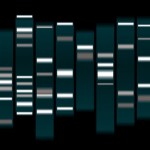 The results in a DNA test look similar to dark bands that form in columns.  The bands in the columns must be identical to be considered a match in the crime scene investigation.  The process of identifying a potential suspect from DNA is called DNA Profiling.  This process is highly credible, as long as the sample is not contaminated at the scene.

In some investigations there may not be any immediate suspects, or the original suspects may have been ruled out.  There is a database of DNA samples locally and state wide that officials may use to compare to.  To find and match samples quickly the FBI developed Combined DNA Index System, or CODIS.  Labs across the company can share and compare samples with each other.

DNA is located throughout a person’s body, there are plenty of things left at a crime scene that can help aid an investigation including: blood, saliva, perspiration, hair, teeth, mucus, and even fingernails.  Most often DNA samples are collected from objects. Some of the most popular being: cigarettes, clothes, stamps, weapons, and cups.